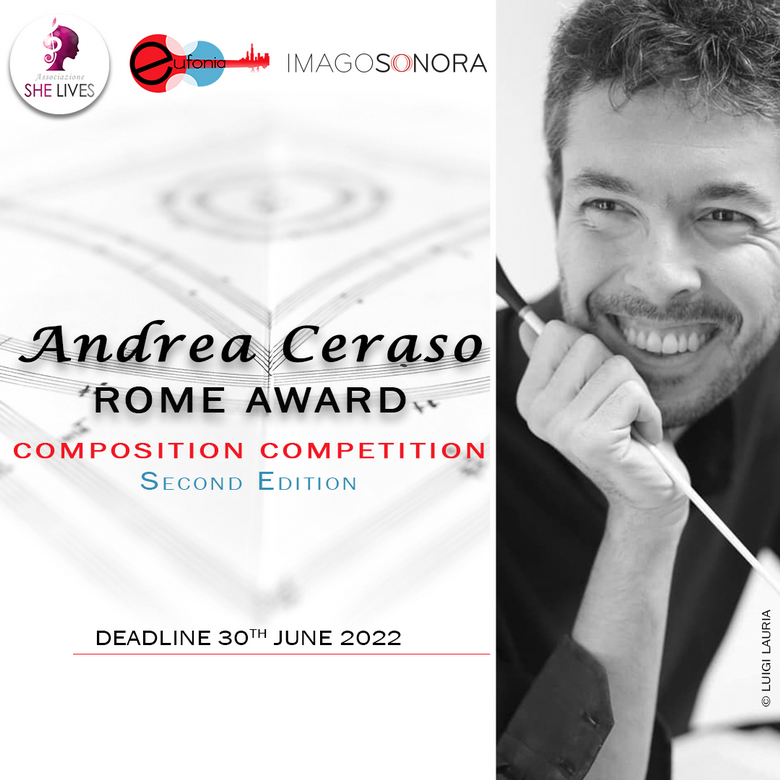 “I cannot put a halt to my existence,
we all have a right and an obligation to make the best of life“
(Andrea Ceraso) 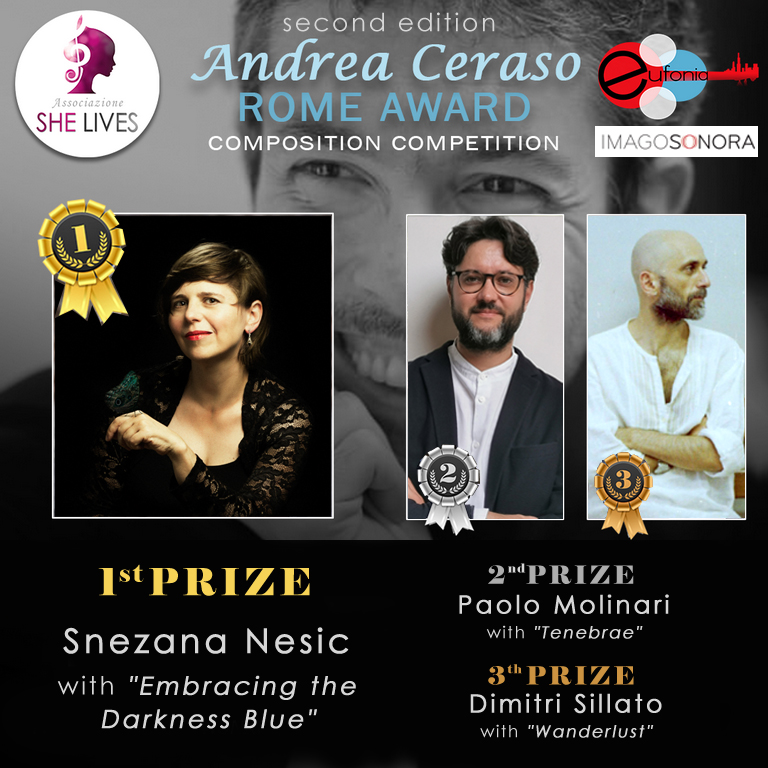 COMPETITION REGULATION
1. The competition is open to composers of all ages and nationalities, without restrictions of gender, ideas, religious affiliation etc.
2. The competition theme is the composition of a piece involving at least one of the following instruments (from the solo instrument to the entire ensemble), including all the possible combinations (duo, trio, quartet, etc.).
The instruments available are (maximum instrumentation):
3. Prepared piano, the use of electronics, and fixed media are allowed.
4. Live electronics are not allowed.
5. The duration of the piece must not exceed 15 minutes. There are no minimum duration limits.
6. The pieces may have already been performed, published, and awarded in competitions other than those organized by the She Lives association.
7. There are no style limitations. The jury will evaluate the musical quality and originality of the writing.
8. The piece can be written with a notational programme (Sibelius, Finale, etc.) as well as handwritten as long as it is clearly legible.
AWARDS
Prize fund: 3000 euro
First Prize (Winner): 1000 euro + performance* + portfolio (i.e., composer’s personal page) on the She Lives website.
Second Prize: 500 euro + performance* + portfolio (i.e., composer’s personal page) on the She Lives website.
Third Prize: performance* + portfolio (i.e., composer’s personal page) on the She Lives website.
*The winning compositions shall be performed by Imago Sonora Ensemble in the 2022/2023 Eufonia Association concert season.
DEADLINE
June 30, 2022 (23:59 Rome time)
PARTICIPATION FEE
The competition participation fee is of 55 euros for the first piece submitted.
The proceeds from the competition will be employed for initiatives aimed at enhancing the figure of Andrea Ceraso, supporting those activities that have animated his human and artistic path, including charity activities.
Each composer can participate in the competition with a maximum of 5 pieces (first piece + 4 others). A sum of 25 Euros will be paid for each additional piece.
For clarity, the following are the participation fees in relation to the number of compositions sent.
1 piece: 55 Euros
2 pieces: 80 Euros
3 pieces: 105 Euros
4 pieces: 130 Euros
5 pieces: 155 Euros
The participation fee can be paid either via PayPal or by bank transfer:
For PayPal – click on the link below and set the fee (choose the language at the bottom right of the PayPal page – Italian or English)
https://www.paypal.com/donate?hosted_button_id=SGB8ASVS8JVSW


or
Bank transfer:
Associazione SHE LIVES
IBAN: IT70D0306909606100000131702
BIC CODE: BCITITMM
BANK NAME: INTESA SAN PAOLO SPA, Milano.
SHE LIVES ADDRESS: Via Belisario 6, 00187 – Roma (Italy)
JURY
Sidney Corbett, composer, professor at the University of Performing Art in Mannheim – President of the jury (Usa / Germany)
Alessio Elia, composer (Italy / Hungary)
Vincenzo De Filippo, composer and conductor (Italy)
PARTICIPATION
Send an email to info@shelivesmusic.it with the header ANDREA CERASO ROME AWARD
Attach the following documents to the email:
1) Score(s) in pdf. The piece must be anonymous. Only the title of the piece must appear on the score. It is possible to send handwritten pieces but they must be clearly legible.
2) Short biography of the composer.
3) Commentary on the piece(s) (NOT mandatory).
4) mp3 of the audio recording, if any (NOT mandatory).
5) Receipt of payment or screenshot of the payment of the participation fee,
6) Application form (download it by clicking on the image in this page: Andrea Ceraso ROME AWARD APPLICATION FORM
Applications for participation and the relative registration fees must be sent by 23:59 (Rome time) of 30 June 2022. Registrations and payments received after this date will not be considered. The winning works will be announced by 30 July 2022. The jury’s decision is final and cannot be appealed. The results will be announced on our website and through our social media platforms, as well as through private emails. The participation fee is non-refundable.
By participating in the competition you accept all the rules that determine it and the processing of personal data in accordance with the current European regulations.
LEGACY
The proceeds from the competition will be employed for initiatives aimed at enhancing the figure of Andrea Ceraso, supporting those activities that have animated his human and artistic path, including charity activities.
For further information, write to: info@shelivesmusic.it
English translation by Archivitaly, a company providing research and publication services for the Arts and Humanities.
_________________________________________________
Image Copyrights
© Background: "Yantra" by Zoltán Jeney
© Photo: Luigi Lauria
Torna ai contenuti